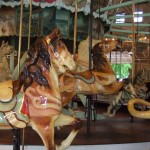 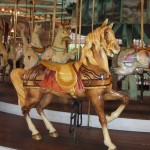 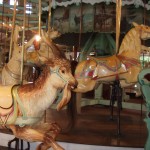 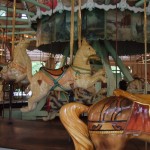 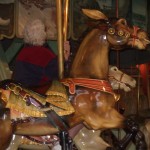 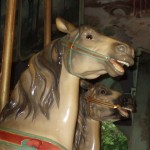 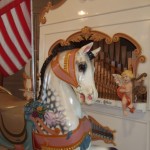 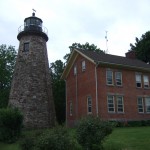 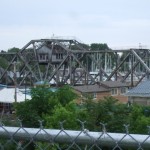 Friday afternoon I found myself in Ontario Beach Park walking towards the lake looking for a historic lighthouse. My sons, daughter and I drove to Rochester for the afternoon. We followed the Great Lakes Seaway Trail which skirts the shoreline of Lake Ontario. The 518 mile scenic route connects places of interest from Lake Erie to the St. Lawrence River. We were looking for the Charlotte-Genesee Lighthouse. We walked across the park towards the mirrored lights and happy pipe organ music of a spinning antique carousel.

I saw a brown park mainenance truck a few feet ahead of us. The driver stopped the truck, hopped out to retrieve an empty plastic bag that someone had carelessly drop. I hurried toward the park employee and pointed to a small structure stripped red and white at the end of a water-break.

“Excuse me, we wondered if that is the lighthouse?” I asked.

“No. The lighthouse isn’t in the park. You have to go back up Lake Avenue, and make turn left into the Holy Cross Church parking lot. The lighthouse is behind the church,” he replied pointing the way we had come. “It’s not opened now. The museum closes at 5 o’clock, but you can walk around the grounds.”

“Ok, thanks,” I answered. I turned towards my children, who are really young adults and said, “Would you mind if we rode the carousel?”

The horses and other animals were spinning on the humid summer afternoon as the merry-go-round mirrors reflected the sun’s rays. My kids humored me as we bought little red tickets for a dollar each, took our place in a very short line, until the bell rang then handed our tickets to a tall man and hurried to find a mount. Of course I chose one of the jumping horses and before long was riding the sculpted beast and thinking of my younger years.

Gustav Dentzel, a German immigrant and woodcarver, settled in the Germantown area of Philadelphia. Gustav’s father was a woodcarver and carousel owner in Germany. The first carousel Gustav made in America he loaded on a wagon and traveled from town to town giving rides. Gradually, he began making carousels for other people which rapidly developed into a booming business. He opened G.A Dentzel, Steam & Horsepower Caroussell Builder in 1867. The carousel animals carved by his business gradually changed over the years becoming more and more intricate and whimsical. The Duchess, a Dentzel Menagerie Carousel, first opened in 1905 and has run continuously since then. The Duchess has 33 horses and an assortment of cats, rabbits, pigs, mule, ostriches, tiger, goat, giraffe and deer. In 1984 the carved creatures populating the carousel were restored to their original grandeur. This year marks its 105th season at Ontario Beach Park in Rochester, NY.

When we rode the Duchess it felt like stepping across time, the pipe organ music played as the horses jumped and whirl around and around. There is something about horses that inspire the imagination, and although other animals populate the carousel it’s the horses that prance and fly gracefully on their brass poles which dominate the merry-go-round. Somewhere deep in our collective conscious the horse holds a special place as a symbol of grace, power and beauty.

After our ride on the wooden horses, we headed back towards our car parked on the street bordering the park. I pulled into the church parking lot and saw the lighthouse, which sits on a hill overlooking the Genesee River. The 1822 lighthouse tower is made of limestone and built in a tall octagonal shape. The brick building behind the lighthouse was built in 1863 as a residency for the lighthouse keeper. The lighthouse was taken out of service in 1881 and slated to be torn down in 1960’s but some students at Charlotte High School organized a campaign and saved the lighthouse.

Behind the lighthouse, there is a beautiful view of the Hojack Swing Bridge which crosses at the mouth of the Genesee River. The bridge is an interesting structure built in 1905, the same year as the carousel, by the King Iron & Bridge Company. The bridge was a railroad bridge and allowed trains to cross the river. A bridge keeper was stationed in the bridge and opened it to allow boats to navigate up and down the river to Lake Ontario. There are groups trying to save the bridge. If you’re interested in historic archeology and saving the Hojack Swing Bridge check out The Bridge Project

The sun drifted lower in the sky. We enjoyed our short trip to the shore of Lake Ontario, but were glad to head home.

Footnote: The Hojack Swing Bridge was demolished in the fall of 2012. Although, the Bridge Project tried to save the bridge they were unable to do so. You can read more about it at The Bridge Project.