How to Teach a Horse to Jump – Part I the Cavalletti 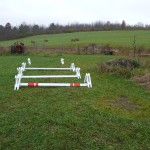 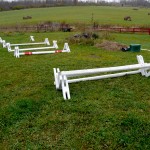 Karen Sykas and I often rode through Round Top Park. Occasionally, we took a trail through a secluded pine forest. Carefully, the horses made their way into the deep woods, down a steep hill to a stone filled creek. Over many years, the creek had cut a small gorge through clay and rock. Towering evergreens bordered each side of the ravine and ferns clung to the rocky sides of the gully. Once we crossed the creek, the horses traversed a sheer bank to connect with the trail on the other side. Pine needles carpeted the ground underneath the trees, muffling the sound of the horse’s hooves. Tall dark trees blocked out the sun offering a secluded canopy. It wasn’t long before we came to a huge, moss covered log that crossed the path providing an impromptu jump. CJ always popped over the log without a problem.

“He certainly seems to like it,” I usually replied.

“We should set some jumps up and train him,” Karen said on more than one occasion.

“That would be fun. Connie said when CJ was about one or two years old he jumped the fence between the pastures, visited the horses on the other side, and then jumped back into his own pasture.”

For a long time that was about as far as we went with CJ’s training; just talk. Where to get the jumps and where to put up the jumps always proved a stumbling block. The old arena at the stables didn’t offer much room; Ballentine’s Horse Heaven was a place for trail riders, although there was a round pen. We thought about setting up some kind of jump in the park. There were plenty of ditches and logs I jumped CJ over but as far as formal training we were in a fog as to how to proceed.

In early August, I told Karen that I was going to build a jump from some boards left over from my husband’s building project. I figured there was room in the old arena for one or two jumps. Moe’s pile of scrap lumber would provide plenty of material to build the jumps; a couple of 4 X 4’s, some 2 X 6’s and plenty of 2 X 4’s. Besides the boards, I had a half can of white paint left over from my own summer project; painting the porch.

“I have a book that I’ll give you which explains how to train a horse. The book has a good section on teaching a horse to jump. I used it when I trained my mare. And I’ll help you when you’re ready to start,” said Karen.

“Thanks that will come in handy and your help is greatly needed.”

Karen not only gave me the book entitled ‘Basic Training for Horses – English and Western’ by Eleanor F. Prince and Gaydell M. Collier, she loaned me ‘The Manual of Horsemanship of the British Horse Society and The Pony Club’. Both books contained a wealth of information. I turned to the section on jumping and read that the first step in teaching a horse to jump was using ground poles and small jumps called cavalletti. The overarching concept of cavalletti was to gradually prepare the horse to the concept of jumping. The exercises allowed the horse to gauge distance, maintain an even stride, develop muscles, and balance needed to actually take a jump. This approach takes the fear out of jumping for the horse.

I had never heard of cavalletti; although, I was very familiar with ground poles. After reading a few pages I realized that I needed to change my design for the jump. Instead of making one big jump, I constructed a series of small jumps using 2 X 4s; ending up with a total of seven cavalletti jumps.

A day or so before Karen and I were to begin training CJ, I loaded the end pieces and poles into my SUV and headed for the stables. When I arrived at the arena, I arranged a line of poles on the ground, evenly spaced apart, and then saddled CJ. As soon as I rode into the arena, he picked up his head and stopped. CJ saw the white poles lying in the grass and the poles scared him. It took a lot of encouragement to get CJ to approach the poles and finally walk over them. Back and forth we walked, up and down the line of poles. Finally, he lost most of his nervousness, relaxed and simply walked over the poles. Once he did that, the lesson was over and back to the barn we went.

I met Karen once a week and we worked with CJ. Karen stood near the cavalletti, gauged CJ’s stride, arranged the ground poles and gave me valuable advice. She took videos of CJ and I jumping and later sent them to me in an email. The videos were a valuable learning tool. I concentrated on getting the horse to walk down the center of the poles. CJ needed to step squarely in the space between each pole, without hitting a pole with his hoof. This meant that the poles needed to be spaced according to his natural stride. Karen determined that distance for CJ was approximately 5 feet between poles.

‘The Manual of Horsmanship’ listed 6 Stages in training the horse to cavalletti with 4 basic jump heights: ground level, 10”, 15” and 19”. We worked with CJ on the first 3 Stages:

Stage 1: Simply walk down the line of ground poles, gradually raising the poles to about 10” off the ground. I had 2 X 6″ blocks which I placed under each pole. This lifted each pole about 5” off the ground and required that CJ pay attention to where he stepped in order to not hit a pole.
Stage 2: The horse trots down the line of poles. The poles are gradually lifted to a maximum height of 10”. Again, we used blocks which lifted the poles to about 5” off the ground.
Stage 3: At a trot, introduce a small jump at the end of a line of 6 ground poles. The jump can be gradually widened and raised in height and the distance from the last cavalletti shortened or lengthened.

We experimented with this jump, sometimes making it wider by placing two cavalletti next to each other to make a spread jump or staggering the jumps so the first cavalletii was at about 15” and the second one higher at 20”. Here we made sure our approach to the jump was from the side with the lower cavalletti; due to the fact that the horse can’t see the lower jump. Our aim was to develop CJ’s ‘bascule’ or the arc his body makes as he goes over the jump. Ideally, he should ascend through his back and when he reaches the peak of his jump, stretch his neck forward and down. The horse’s withers should be the highest point over the jump. A small spread jump which is wider than tall allows the horse to develop and achieve the bascule and use his neck and head correctly.

Approaching the jump, I often felt CJ’s indecision as he shifted under me; to jump or not to jump seemed to be his internal question. When he tried to dodge the jump I reined him back towards the cavalletti and over we went. Once he completely stopped in front of the jump and bent his nose down to have a closer look. I urged him forward and even if he hesitated CJ jumped. Many times in the beginning he “popped” over the jump going straight up and down and much too high This propelled me backwards and ‘left me behind’.

“Hold on to the mane! That way you’ll stay with him over the jump,” Karen shouted above the sound of pounding hooves.

“Ok.” I grabbed the mane with both hands and CJ and I jumped some more.

Karen suggested painting some of the poles with red or blue stripes. I tried painting one pole with red stripes. I introduced the new pole into the line of cavalletti. As soon as CJ saw the red striped pole he became afraid. He refused to walk over the line of ground poles. Definitely, he could see the color red and didn’t want anything to do with it. Nevertheless, after some gentle persuasion CJ walked and then trotted over the poles, even the red one.

One day, I came up to the stables to work with CJ by myself. This meant getting on and off the horse every time I needed to move the poles. CJ was very good about that, I carried the pole and he was happy to quietly follow me around as I set up a jump or moved a pole. I set up the usual cavalletti jump at the end of a series of ground poles. CJ jumped the obstacle but once knocked into the pole with his hind leg bringing down the pole. We jumped a few more times and called it a day. When I dismounted and took off his saddle I noticed blood dripping down his back leg. He wasn’t limping, the cut didn’t seem to hurt him when I washed it out and applied Wonder Dust, but I felt bad. I decided to buy some boots to protect his legs.

What type of boots to buy? Luckily, after a conversation with a new boarder, Ashley, I purchased open front jump boots. The boots are designed to protect the horse’s tendons but still let the horse feel the pain of hitting the pole when he misses the jump. I put the jump boots on along with CJ’s Old Mac boots and started jumping again.

The weather turned cold. Colorful fall leaves left their branches, blown away by the chilly whisper of the coming winter. Thanksgiving came. The approaching darkness marched into our lives, bringing sunset earlier and earlier until by 4:30 the day was done. Karen and I stopped working together with CJ. Early December brought frigid weather but occasional a day or two in the 50’s. The ground hadn’t frozen yet. I continued to work with cavalletti jumps to help CJ stay in shape and not forget what he had learned. Advancing into new learning for CJ was put off until spring when the days grow longer and warmer. Then, we’ll move on to Stages 4, 5 and 6, and maybe even try the cavalletti configuration called the ‘Box’.

This entry was posted in Uncategorized and tagged cavalletti jumps, jump boots, training a horse to jump. Bookmark the permalink.