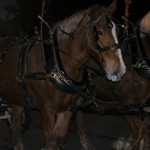 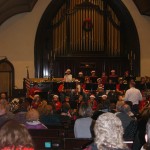 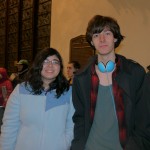 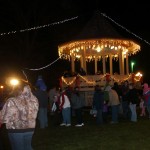 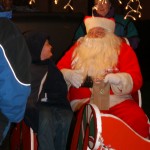 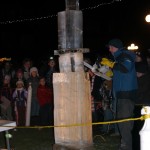 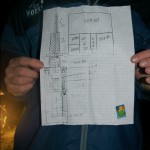 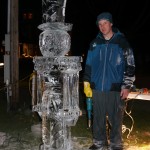 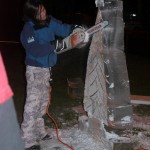 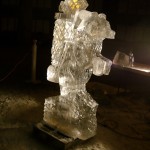 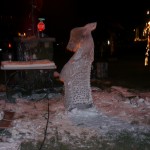 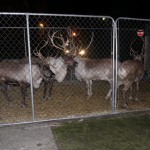 At 6:30 Moe and I put on jackets and walked out our front door headed for the Tinsel-N-Ice celebration at Muldoon Park in Waverly. The dark winter sky provided a backdrop for orange and red flashing lights produced by a crossing guard at the end of the street and a fire-engine parked nearby at the intersection of Chemung and Lincoln. Up and down the street parked cars and trucks lined the curbs. Horses headed towards us, walking down the middle of the road pulling long wagons filled with people.

“Why don’t we take a wagon ride this year,” I said.

“Ok,” replied Moe as we rounded the corner and entered the park.

In the park it was wall to wall people. Three different wagons offered free rides to the public; Max Weed and his Haflingers and Al Fargnoli from Sweeney’s Market in Apalachin, NY. We made our way through the crowd to the line of people waiting for wagon rides.The line stretched to the other side of the park. There must have been a hundred people waiting to climb into the horse drawn hay wagons for the ride around the block.

“Why don’t we have a look at the ice sculptures?”

We walked in a huge circle around the park, pausing at the chain link fence which held Mike Cary’s reindeer. I looked for James Steffen, the young man I met last year, but didn’t see him in the enclosure. A little further on, we saw Santa in his sleigh inside a small pavilion. He handed out red and white striped candy canes and listened to children’s Christmas gift requests. We continued walking and briefly stopped to watch the ice sculptors begin their creations.

“It’s really crowded out here. Why don’t we listen to the Jazz Band concert at the Presbyterian Church?”

“That’s a good idea,” I replied as we turned towards the church, walked up the stairs and entered the massive building.

As soon as we entered the church, we met Cristina and her friend Caleb. All of us stood, listened and watched from the back row near the door; most of the seats were already taken. In front of the towering pipe organ, the members of the Waverly High School Jazz Band played swing music from the 1940’s. Jazzy Christmas music filled the old church. The bright, brassy sound produced by trumpet players mingled with the raspy saxophones and soft woody whispers from the clarinets. The drums supplied the rhythm and the conductor‘s baton delivered the tempo. The air filled with familiar holiday melodies which were enjoyed by old and young alike.

It wasn’t long before I found myself back home again. Going back to the house for a bite to eat wasn’t supposed to take long. However, before I knew it time had escaped me and clock read 8:10.

“Oh no, I hope I still have time to get some more pictures of the celebration,” I said grabbing my coat, camera and hurrying out the front door.

The mood on the street was very different from earlier in the night. The street, almost deserted, all the parked cars wedged next to the curb were gone; although, the fire-engine still sat next to the stop sign at the corner of Chemung and Lincoln and the crossing guard still swung his huge yellow light to stop traffic. When I arrived at the intersection, I knew something was wrong. Huckle’s tow truck was parked behind the fire-engine and one of the volunteer firemen carefully poured gas into the vehicle’s gas tank.

‘They must have run out of gas’, I thought and hurried down the darkened street. A few families strolled towards me, walking away from the park. A tired team of Belgians and their owner headed for a horse trailer. The sculptors from Sculpted Ice Works finished up their work as a few people watched. I stopped at Mike Swingle’s ‘Christmas Bear’ and bumped into Neil Trimper.

“So which sculpture is yours?” I asked.

“Mine is over there near the reindeer enclosure. It didn’t come out as planned. I had wanted to make Rudolph with a large set of antlers but the antlers didn’t adhere well and broke off. So now we’re calling the sculpture ‘Rudolph’s Girlfriend’” he said good-naturedly.

“That’s too bad, but I’m sure it’s still a nice sculpture.”

Now that the crowd had left, I was able to speak to the sculptors and take pictures of their creations. I walked across the park to where John Hanson stood finishing his sculpture ‘Toy Soldier’. Not far from where he worked, Lora Borer evened up the base of her ‘Christmas Tree’.

“So how did you come up with an idea for the ice-sculpture? Do you sketch it out first?” I asked John.

“Yes, we draw a sketch and work out how many blocks of ice we’ll need for the sculpture,” he replied pulling a piece of paper from his pocket. John unfolded the sketch and showed me the blueprint for his work of art. “It’s important to know how the blocks of ice will fit together before we start carving. My design is a combination of 3 different objects; one nutcracker and two toy soldiers. I began with two 20 X 40 blocks of ice, frozen at 16 degrees.”

“So how do you get the blocks to stick together?” I asked.

“First we make sure the ends are flattened, and then a small amount of water is put between the blocks. This glues the two blocks together. If the temperature isn’t cold enough the blocks won’t freeze and tonight was warm. We were a bit worried. It takes about 30 minutes for the blocks to set up. We started with Lora’s and ended with Neil’s.”

“Do you think the ice for Neil’s sculpture wasn’t quiet set up?”

“I think that might have been the problem. It’s warm out here tonight and his project was intricate with a massive rack of antlers.”

“How many days before the sculptures melt?”

“Have you worked a long time for Sculpted Ice Works?”

I headed back across the deserted park. Mike Cary loaded his sleigh onto the back of his truck and the reindeer waited to return home. The street lights made the ice sculptures shine in the dark as light reflected off their shiny surface. I stopped for a moment in front of Neil’s sculpture. Even without the antlers it was a nice piece of artwork. I thought, ‘sometimes we have to push the limits even if we fail, for with every failure comes knowledge of how to succeed next time.’

I turned toward home and walked down the empty street. The barricades blocking off Chemung Street were gone and the fire engine had left. The street returned to how it was before the festival only the ice sculptures lingered as a reminder of the night’s celebration.