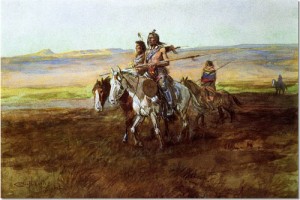 When I was young the idea of a vast inter-continental network of Native American trails, weaving across the North American continent was unheard of. It was Lewis and Clark who blazed their way across the American wilderness to the Pacific Ocean with minor help from their Indian scout, Sacagawea. None of my teachers mentioned that hundreds of years before Europeans set foot on the soil of North and South American, Native Americans created an extensive series of interlocking trails connecting well established trade centers.

These trade routes proved important in the distribution of the horse. The stage was set in 1680 for Native Americans to acquire the horse when the Pueblo Indians revolted against the Spanish colony in New Mexico. After forcing the Spanish retreat into Mexico, the Pueblo Indians captured thousands of horses. Having worked as slaves for the Spanish rancheros, the Indians knew how to handle these powerful animals. Once the horses fell into their hands, they managed the herds and began to trade horses to other tribes. This was an easy task since the Pueblo Indians already had well established trade centers linking the Ute, Comanche, Apache, Kiowa and Jumano tribes. Trails leading from the Pueblos radiated like the spokes in a wheel; North, South, East and West. No wonder it took very little time for Indian tribes throughout North America to acquire the horse. 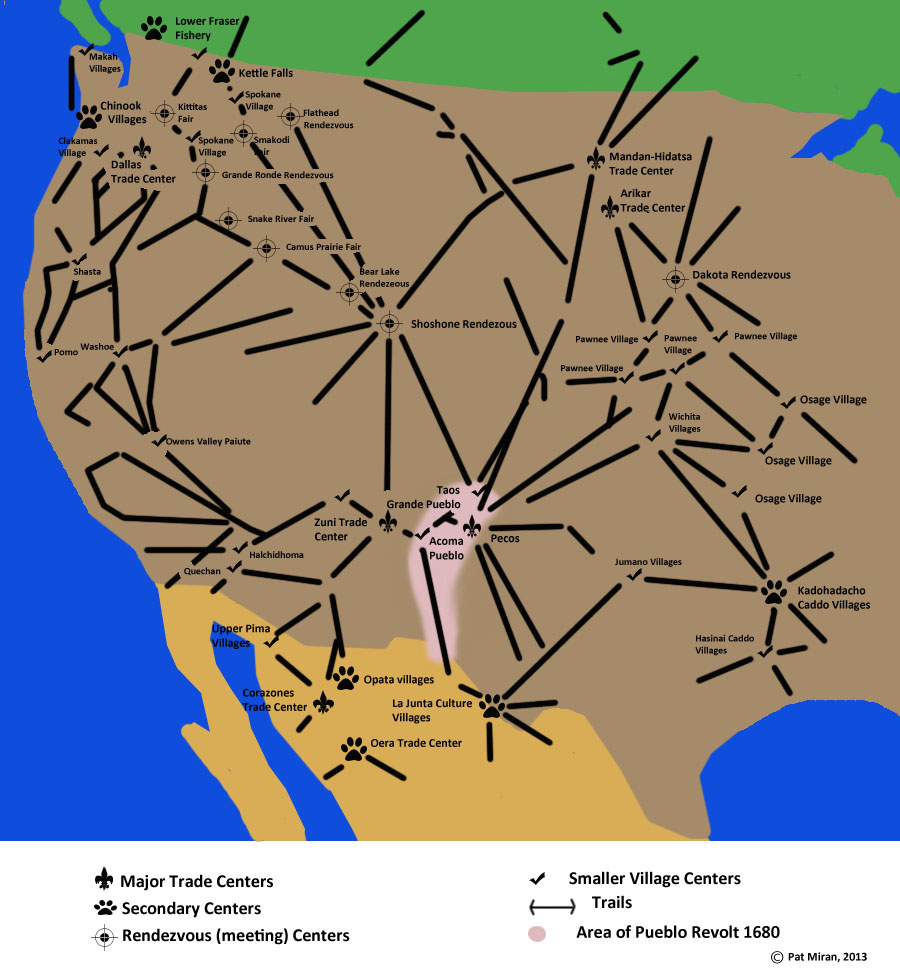 By 1700 the horse was owned by tribes in the distant northwest; Bannock, Nez Perce, Cayuse, and Umatilla. At the same time, horses moved east to the Crow and Missouri River tribes. The horse quickly became incorporated into the Native American way of life and proved important in trade.

Early European settlers, traders and explorers followed Native American trade routes often with the help of Indian guides. Inevitable conflict culminated in the Indian Wars in the west, and as time marched on, the Indians were moved to reservations. Their lands were settled by farmers and ranchers, but the Indian trails were not forgotten. Many Native American cross-continental trade routes eventually became asphalted and paved during the construction of today’s interstate highway system. There are perhaps a few Native American trails winding through the continental divide which still feel the footsteps of an occasional hiker. Gone are the days of the open prairies, the vast herds of buffalo and the millions of Native Americans who traversed an intricate web of trails for the purpose of trade. 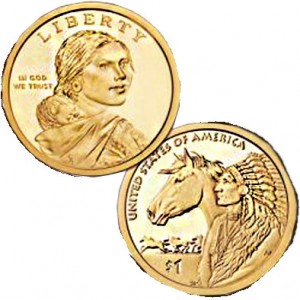 Footnote: In 2009, the US Mint struck a new dollar coin series with the theme of Native Americans. On the obverse or face of the coin, Sacagawea and her child were shown. Each year the reverse side of the coin featured a new image. Last year, the coin’s reverse side portrayed the importance of the horse and Native American trade routes in 17th century America.