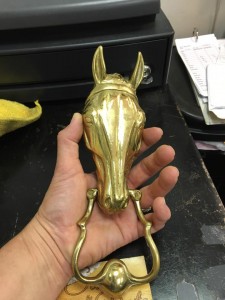 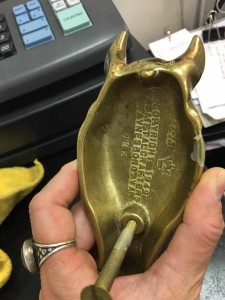 A few days ago, I received a call from an old friend; Deb Twigg. She had found on eBay a brass doorknocker in the shape of a horse’s head and thought of me. Deb invited me down to Crooked River Co-op on Broad Street; which she owns and operates. As a gift, Deb presented the doorknocker to me. The doorknocker was a real beauty; made in Waynesboro,Virginia by VA Metal Crafters, copyright 1949.

I met Deb in 2007; when my daughter, Emma, and I volunteered at SRAC. The museum and archeology center had recently opened to the public. For a brief time, I served as a board member. In the fall of 2008, I was volunteering at SRAC when a fellow volunteer told me about her experience helping rescued horses in Newfield, NY. That’s how I came to volunteer at Meadow Gate and meet Pam Watos. It’s remarkable how we are all connected. 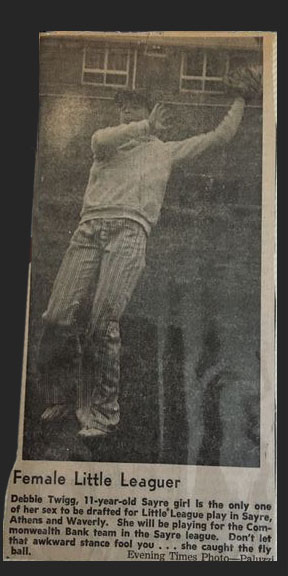 Deb grew up in the “Valley” which comprises Athens, Sayre and Waverly. Like so many other small towns in that time period, it was still safe to play in your neighborhood after dark which the kids did every summer night. All the neighbor kids came together.

One favorite “homegrown” game the kids played they called “Gun Tag”; a loose game of tag. To begin with everyone put a foot in a circle, then the kids would chant a rhyme; ‘engine engine number nine going down Chicago line..one train fell off the track do you want your money back’or ‘bubble gum bubble gum in a dish how many pieces do you wish’ or ‘strawberry shortcake, cream on top, how many boyfriends do you got? 1,2,3,4,5 your it’; and of course the old favorite;’eeny meeny miny moe catch a tiger by the toe’.

The game proceeded as follows: the person who was ‘It’ would say “BANG I shot you ‘Phil or whoever’; then, “Phil” had to go to his front porch and sit until someone came from hiding and yelled “Jail Break!” Being chosen ‘It’ proved a thankless job; people sneaking around and running past you in the dark, then once someone was caught, only to see them set free to the sound of ‘JAIL BREAK’. The kids also made up their own yodel, OOOO-AHS; to taunt the person who was it. Nobody could ever guard the porch and find everyone, so it was an endless night of running after people in the dark for that one person who was ‘It’. 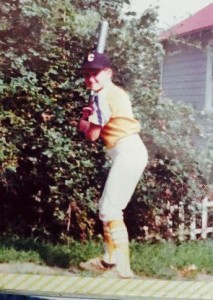 At age eleven, Deb became the first girl Little League player in Sayre, PA. The only girl to make the team the first year girls were allowed to play with the boys.

The Native American Graves Protection and Repatriation Act (NAGPRA), a federal law, enacted on November, 16, 1990, made it illegal for federal agencies and institutions that receive federal funding to have human remains, funerary objects and sacred objects. The law insured that these artifacts and human remains were returned to Native Americans. So the skeletons were removed. 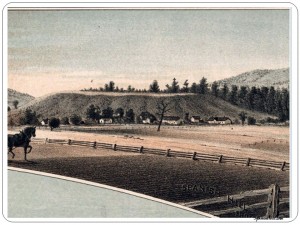 After the visit to the museum, the students headed for Spanish Hill. Although today a private residence sits on top of the hill, during that time period people often visited and explored Spanish Hill. The students raced to the summit, Deb in the lead; straight up the hill a distance of 230 feet.

Standing atop Spanish Hill, the students were awestruck by the incredible silence which engulfed them. Amazed at how far they could see; the students looked down at the highway far below them. All the kids except one, decided to run around and play games. Duncan, always excluded and picked on by the other students, retreated to a wooded area and played by himself under a tree.

On that particular day, Duncan’s lonely climb and exploration payed off; he found a fully grooved, Native American ax. He became the hero of the day; all the kids gathered around. The teacher had an arm around him in congratulations as Duncan proudly held the ax. It became Duncan’s day! A memory that Deb never forgot. 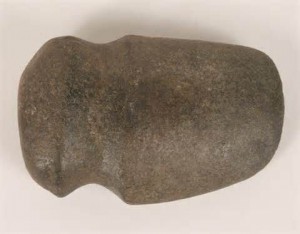 Deb decided to call up the Tioga Point Museum and ask them what they knew about Carantuoan and Spanish Hill. The person on the other end of the line listened to her question and quickly responded, “Spanish hill is not Carantouan and there are no giant skeletons!”

Surprised by the response, Deb felt challenged to find the answers to the mystery surrounding Spanish Hill and the Native American village Carantuoan. Not one to turn away from a problem, Deb called the president of Carantouan Greenway, Marty Borko. He explained to Deb that Carantouan Greenway simply used the word Carantuoan. There was so much controversy surrounding Carantuoan and Spanish Hill that if Deb ever figured it out; he would really like to know what the truth was.

And so, Deb set out to find answers. She went to every museum and library; photocopied every report, speech, and article she could find about Spanish Hill over the last hundred years. She immersed herself in the documents; people and events seemed to jump off the pages as she read. 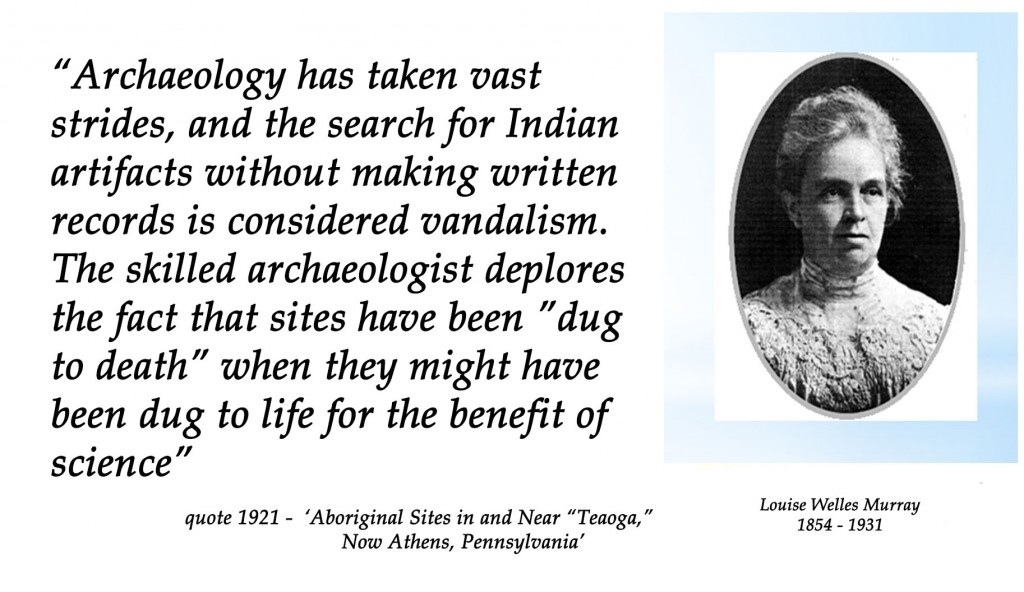 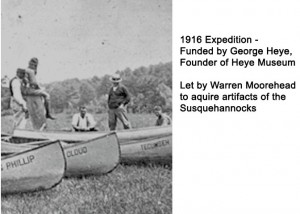 Deb formed deep opinions of the people she read about; they became important role models in her life, even though, she never met them and they had long passed away into history.

The people who inspired Deb were many. Louise Wells Murray who founded the Tioga Point Museum in 1895. Also, Ellsworth Cowles who worked with Louise as a young man and discovered a village site below Spanish Hill in 1933. There were also villains in Deb’s opinion; Warren K. Moorehead, George Heye, and others who did their best to plunder the Valley archeology sites and confuse local history. 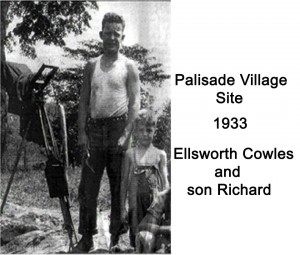 With Deb’s new found knowledge, she visited ‘Pennsylvania Archaeology Research List’, which at the time had an open forum. She started commenting on Spanish Hill and all the things she had learned. To her surprise, the other participants ripped her comments to pieces. One commenter in particular asked Deb, “Why hadn’t you read Pennsylvania State archaeologist, Barry Kent’s book? He stated that Spanish Hill is nothing more than a glacial mound and that locals believing otherwise was simply folklore and myth.”

Deb purchased Barry Kent’s book, ‘Susquehanna’s Indians published 1984. Her recent research helped Deb discover exactly where she felt the state archaeologist had gone wrong. This became the motivation for writing her own article, completely referenced. Deb submitted the article for peer review to The Society for Pennsylvania Archaeology. In the winter of 2005, her article was published. 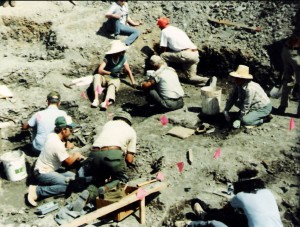 Her studies led her to people who had memories of the excavations at Spanish Hill; Dick Cowles and Ted Kier. Dick Cowles helped his father, Ellsworth Cowles, discovered the village site below Spanish Hill. Ted Keir also excavated the site at Spanish Hill; in addition, he worked with the local Chamber of Commerce in the 1980s to preserve the Hill as a historic site.

In 2005, Deb, Ted Kier and Dick Cowles became co-founders of The Susquehanna River Archaeological Center of Native American studies, SRAC. To house the center, they purchased the old Philadelpia Sales building on Broad St. in Waverly, NY in the winter of 2007. The plan was to preserve all of the archaeology of the region that they could and move forward with continued research. They felt that local collections were in dire need of preservation and that more research needed to be done. In addition, they wanted to provide a place where ideas and information could be shared; as well as, a place to educate the public about local Native American prehistoric and historic past.

This past year, Deb lost a good friend and co-founder Ted Keir. Dick Cowles is now 93 and still conducts tours in the museum every Thursday. SRAC also has two archaeologist on staff and excavations to uncover more answers are underway. The center is staffed 100% by volunteers and the doors are open five days a week. It is Deb’s wish that SRAC lasts for years to come and that the community will continue to support the center in the future. She hopes that like Louise Wells Murray, the museum she helped create will be Deb’s legacy to future generations. 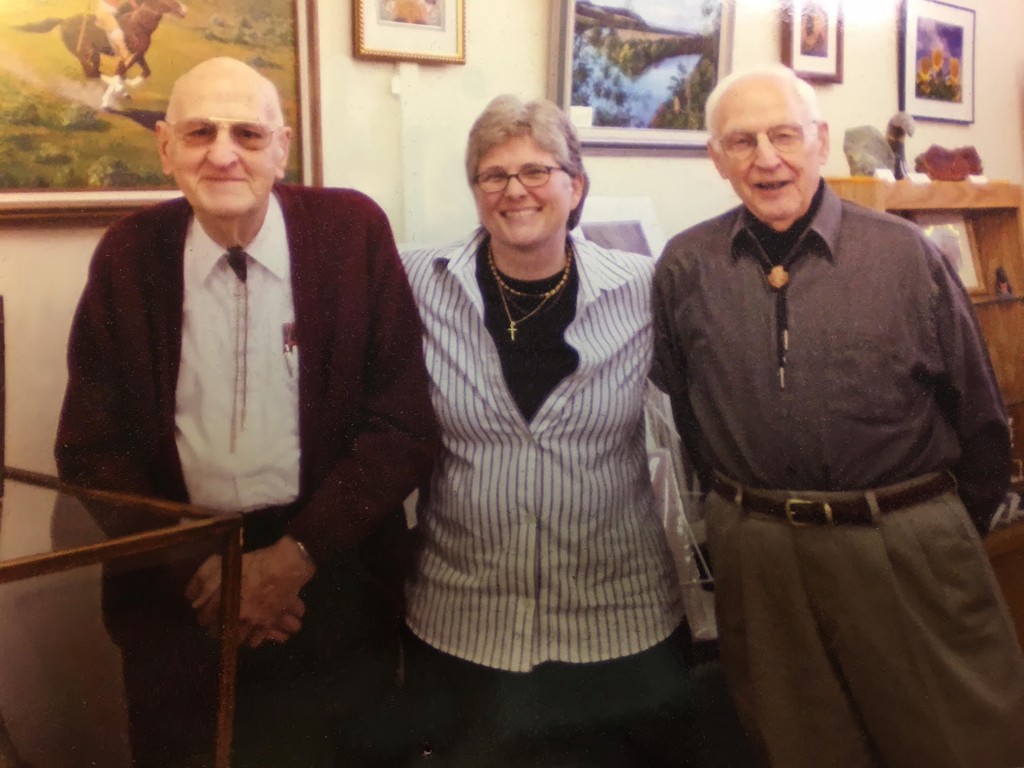