Horse racing is a business, sport and a passion. Thoroughbred horse racing consists of many practices and terms; pinhooking in particular is a common strategy. The basic idea is to purchase a thoroughbred foal at auction and sell the horse when it becomes a yearling. Since buying a thoroughbred can be a pricey gamble; people often pool their money and take a share in a foal; hoping to turn a profit when they later sell the horse at auction. 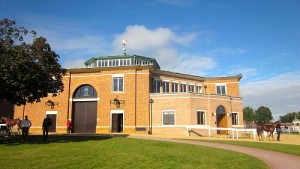 Tattersalls auctions was founded in 1766 by Richard Tattersall; today headquartered in Newmarket with another auction house at Fairyhouse just outside Dublin, Ireland. The international firm offers thousands of thoroughbred horses for sale every year. At Tattersalls prices can soar to millions when the ultra-rich compete for a prospective horse.

Racing enthusiasts in the UK often pool their funds and invest in a thoroughbred at Tattersalls December Foal Sale. That’s exactly what racing romance author, Hannah Hooton, and five of her friends did last year. Each member of the group had their own reasons for purchasing the foal; for Hannah it was the fun and the experience which comes with owning a racehorse.

It all started, when Hannah went for a drink with a good friend, Will. He was the manager of a stud farm in Newmarket and invited Hannah to join the pinhooking group. Each member of the group had clear responsibilities. Will, Dee, and Laura took on the day to day work of looking after the foal. This included breaking the horse to bridle, lunging work, grooming and daily care. Another member was a vet. She was instrumental in choosing which foal they would buy and care for the horse if injuries were sustained. The final two members, Hannah and Laura’s mother, were silent partners.

The group had been perusing the Tattersalls Sales Catalog for a couple of months; looking for potential foals. They analyzed each horse’s pedigree and price. Foal’s sired by stallions with a tried and tested reputation were too expensive for the group. They earmarked eleven foals. A filly sired by Swiss Spirit, who’s foals had not yet distinguished themselves on the track; looked promising. 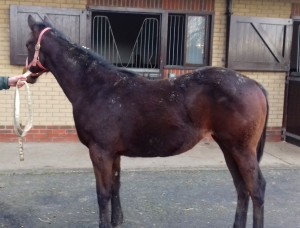 Before the foal went into the auction ring at Tattersalls; the group’s vet called the filly out to have a closer look at the horse. The concern was the filly’s protruding top lip which the vet suspected might indicate something wrong with the foal’s jaw. It turned out it wasn’t anything to worry about; the group bid on the foal and won. Because of the protruding top lip, they decided to call the filly Jolie, named after Angelina.

The months passed by. Hannah enjoyed the exhilaration of owning a horse again. She visited Jolie every few weeks, watched her progress in training, and took lots of pictures. 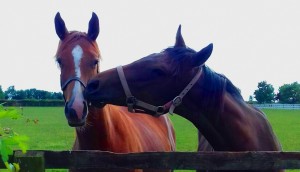 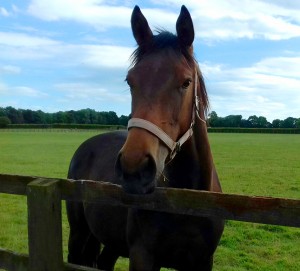 Owning a racehorse can be risky. Young horses can break a leg playing around with other horses in the pasture. Also, disease or complications from an illness can render a horse useless at the track. Fortunely for the pinhooking group, Jolie remained sound and healthy through the ten months of their ownership.

Hannah also followed the track record of Swiss Spirit’s offspring. His first crop of two year olds were an unknown quantity in the breeding shed as their first time on the track came after the group had purchased Jolie. If his progeny did badly then Jolie’s sale price would reflect that, but if they did well, the opposite would occur. In the first few weeks of the racing season the 2 year olds he had sired were at the top of the leaderboard. This would prove lucky for the pinhooking group when they put Jolie up for auction. 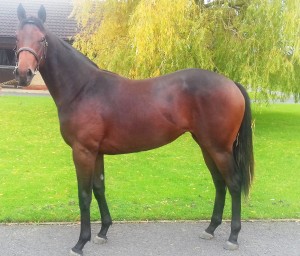 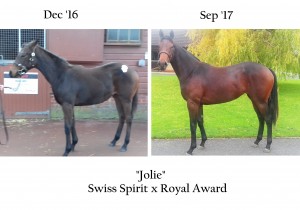 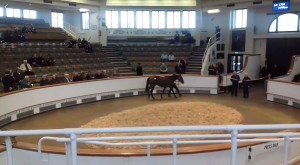 October came and Jolie returned to Tattersalls. The pinhooking group watched as Jolie was led into the ring and the bidding began. Hannah had throughly enjoyed owning a share in Jolie and would be happy to just break even on the sale. The auctioneer called out the bids and the price grew higher and higher. The pinhooking group watched as the bidding stalled at 6,000 guineas, then continued to 9,000 ($12,500 US dollars). Since the group had purchased Jolie for 3,600 guineas, they were all very pleased with the outcome of the sale.

The ups and downs of owning a racehorse can be exciting; like any risky endeavor there within the thrill lies. For Hannah it was sad to see Jolie go; although, she planned to follow the horse’s racing career.

A bitter sweet feeling washed over Hannah as she watched Jolie leave the ring with a new owner. Yet she knew the buyer, a very good trainer local to Newmarket, would take excellent care of the yearling. He created a racing syndicate for Jolie, which meant the yearling would be owned by another group of racing enthusiasts. Thus came an end to Hannah’s pinhooking experience, until the next future auction when the group decides to buy another foal.

*Note: Hannah has several romance novels on the market involving horse racing. I have reviewed two of her novels ‘Making the Running’ and ‘Share and Share Alike’. Hannah has a great deal of knowledge and experience with horses, which give her novels depth, laced with interesting detail. She has many other novels available as digital books or hard copy. Her novels can be found at the following link: