Sam Gives Up the Ghost

Sam, a Belgium, the oldest member of the herd came to Horse Heaven in December 2011 from a horse dealer in Monroeton, PA. Although upon his arrival, Sam experience bullying from the herd; within a few months he bonded with the other horses. Sam and Myrtle often waited together by the barn door to come in for the night.

No one knew Sam’s exact age. The former owner’s vet said around 12; the horse dealer’s vet guessed Sam to be in his 20’s. After a horse gets his permanent teeth it becomes hard to tell exact age. Without papers, a horse’s age becomes a guessing game. Connie’s vet put Sam’s age closer to 30.

The horse dealer assured Johnn and Connie that the old Belgium had been ridden; and in fact a 9 year old rode Sam at the Troy Fair. It wasn’t long before Johnn became attached to Sam. He enjoyed the draft horse temperament and ability to perform farm work. Johnn had owned other Belgiums; Champ and Myrtle. Each horse had its own personality and idiosyncrasies and each horse had a special place in Johnn’s heart.

Several people rode Sam; including me. Cristina came in the spring of 2012 to learn basic horsemanship. Sam, gentle and quiet, proved easy to brush and saddle in his stall. In fact, he relished the barn atmosphere. The horse proved to be ‘barn sour’. Although, with much encouragement Sam did amble up the road for awhile until he tried to stop and return to the barn. After, Cristinia returned to school and her studies nobody rode Sam. 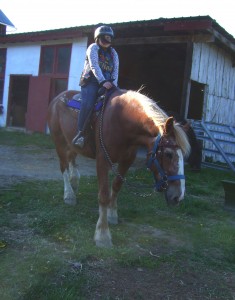 In 2015, Sam developed a small fleshy growth in the corner of his eye. Johnn monitored the abnormality and tried medication; however, within a month the pinkish mound of skin grew 50% of its original mass and transformed into a walnut sized tumor.

Connie scheduled an appointment with their vet, Robin Rodgers, to have the tumor removed. Robin carefully cut out as much of the tumor as she could. Without performing a biopsy, Robin couldn’t determine what type of tumor she had extracted; though, she suspected ocular-squamous-cell-carcinoma. Without chemotherapy there was always the chance that some cancer cells remained and the disease would return. 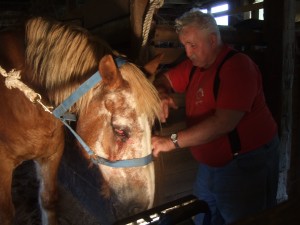 Years passed by and there was no visible return of the disease. Sam seemed fine and in good health; although, advanced in age. No one knew for sure exactly how old Sam was; somewhere between 20 years and 40. In human years that put Sam between 60 and 120 years old. For an old horse, he was doing pretty good.

Since Myrtle’s death on December 3, 2018, the Valley had constant rain. Spring brought more rain and prevented me from riding. Then on April 15th Connie called me to say Sam had died during the night and he was in his stall; not to panic if I saw him as Johnn was arranging burial.

There had been no sign of illness or difficulty in moving; Sam simply died in his sleep. Of course all kinds of thoughts run through your mind; did the cancer take his life, eat away his liver even though he appeared perfectly healthy; or did his attachment to Myrtle bring him sorrow and his will to go on living simply vanished; or his advanced age, near 120 in human years, laid him low? Of course, there are no answers to these questions. The fact is Sam lived a good life and died quietly and painlessly in his sleep. As with every life, death leaves a void. Sam will be missed at Horse Heaven. 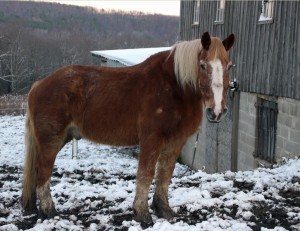